A bill to raise the state’s minimum wage passed out of the Illinois Senate Executive Committee Wednesday and is up for another vote in the full senate Thursday. The current minimum wage is 8.25 per hour and under the proposed new law, the wage would go up 50 cents an hour until it reaches $10.55. Our Springfield reporter Brittany Harris reports lawmakers argued for more than an hour whether the minimum wage should go to more 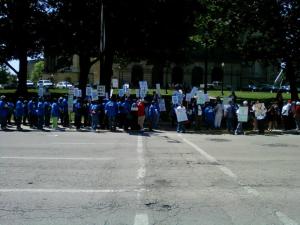 Action Now Illinois rallies outside the State Capitol anticipating a vote on Raising the Minimum Wage.

than 10 dollars an hour. Critics claim the hike would hurt business and their ability to hire new employees.   But according to a January 2012 report by the Economic Policy Institute, Senate Bill SB 1565 would result in a net increase in economic activity of approximately $2.5 billion dollars and would generate an estimated 20,000 new jobs.

Action Now Illinois’s mission is to organize working families and strengthen their voices on issues of racial, social and economic justice. Action Now is active on issues that include foreclosure and vacant properties, school improvement, access to health care, living wage jobs, utility costs, immigrant rights, public safety, (both antiviolence and criminal justice reform), and environmental justice. Action Now Illinois is a member-driven organization. Our issue campaigns come out of listening to community residents through regular monthly meetings, engaging the base by going door-to-door and mobilizing all residents to take part in their community. Our leadership development includes formal leadership training and the active involvement by members in the planning, implementation and evaluation of issue campaigns. Action Now Illinois members are committed to fight for equal rights, equal services, and equal justice for working families. To become a member of Action Now; call (217) 528-1356 or e-mail ActionNowSPI@gmail.com!
View all posts by actionnowillinois →
This entry was posted in Uncategorized. Bookmark the permalink.